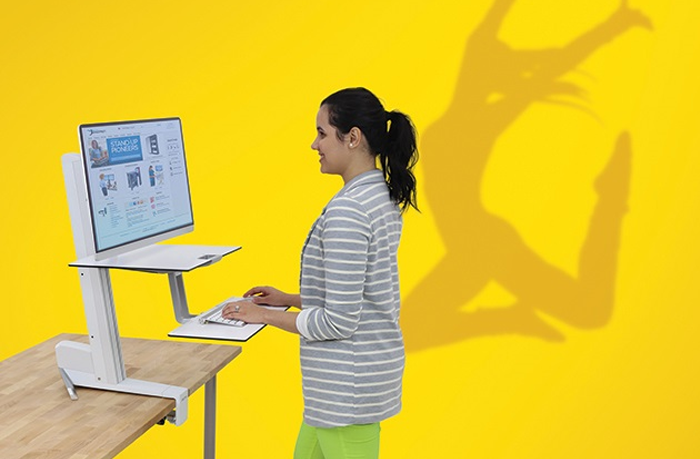 Walking meetings vs. standing desks: Why do I have to choose? Think like a millennial

The uncompromising approach of the new generation of workers both shocks and inspires me. They dare to suggest solutions that sound impossible to my jaded ear. And they don’t always easily tolerate a choice between this or that. Maybe we can learn something from their openness to breaking the rules so to speak.

The new generation of workers will be sure asking for this and that. And a feasible response to them would be, “Of course we can – in fact, we should!” We, as workers, will benefit from both.

While both walking meetings and standing desks serve the cause for worksite wellness, they do not function physiologically in the same way. Placing them in opposition to each other reflects a basic misunderstanding of the importance of the different types of movement in the workplace. This could mislead readers into thinking walking meetings and standing desks are more similar than they really are, and ultimately to some ill-informed decisions around their workplace activity.

Don’t get me wrong, I am not criticizing the article’s promotion of walking meetings. I only want to emphasize that adjustable sit-stand desks are designed to reduce the periods of uninterrupted sitting so prevalent in office environments. Even if a person engaged in four 30-minute walking meetings every day, they would still be at risk of “sitting disease” if they also sat for more than 30 minutes at a time. This is true because physical activity like walking does not compensate for time spent being sedentary.

There is quite a bit of research being done to establish a dose-response relationship between movement and sedentary time. Some experts even suggest that too much physical activity during the work day can cause longer uninterrupted bouts of sitting later as a compensation. The balance between too much sitting and too much exercise is still to be determined.

In the meantime, moderation is recommended.

You don’t have to be a millennial to want both worlds. Maybe I learned it from my millennial children, or maybe I’ve just come to experience the benefits of both in my own work day. You could easily interchange walking meetings with yoga at work, or taking a run at lunch. The argument remains the same. Both are better for you. Sit-Stand desks have a place in your work world, whether you work in a corporate center or have converted your back bedroom for a home office.

Let’s all start thinking like the next generation of workers. They don’t accept unreasonable choices sitting down, and neither do I.