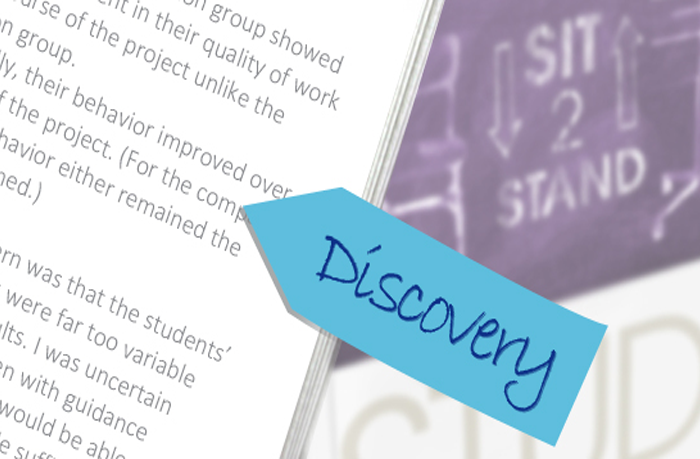 The importance of pilot studies in research, part 2

When Ergotron chose to support the ATTAIN pilot study about the impact of using LearnFit adjustable standing desks in a computer lab for special needs students, we didn’t know what to expect. Would we get clear results? Would they be transfer to other populations? And mostly, would they be dismissed because of the small sample size?

For this Sit-Stand Action Research Project, researchers randomly assigned 13 ATTAIN Technology Lab students to intervention and comparison groups or a 40-day period. The intervention group received sit‐to‐stand units which enabled them to easily alternate between sitting and standing. Students were encouraged to stand for at least five minutes every 30 minutes, but could opt to stand longer. The comparison group of two students continued to work at traditional sit-only desks.

My primary concern was that the students’ learning challenges were far too variable to provide clear results. I was uncertain that the students, even with guidance from their instructors, would be able to maintain a sit-stand cycle sufficient to impact behavior and performance. My fears were unfounded.

I was further encouraged when the study was published in 2014 by the American College of Sports Medicine in their HEALTH & FITNESS JOURNAL, VOL. 19/ NO. 1.

In that article, Sit, Stand, Learn Using Workplace Wellness Sit-Stand Results to Improve Student Behavior and Learning the authors Nicolaas P. Pronk, PhD, and Abigail S. Katz, PhD, identified prolonged sitting time as a risk factor for various negative health outcomes including metabolic syndrome and obesity. They propose breaking up extended periods of sitting with intermittent standing as a promising solution and point to an emerging body of research suggesting that doing so improves emotional health, such as mood, as well.

This simple pilot study elegantly demonstrates that our bodies and minds are not separate entities that function independently of each other — something we’ll examine more closely in a later post.

Knowing that “sitting disease” is a growing public health issue, Ergotron has supported independent researchers around the world. They represent many disciplines, from ergonomics to epidemiology, sports medicine to psychology and all are united in a single goal: to reduce the harmful effects of sedentary behavior and by improving health, to optimize performance. In the last five years Ergotron has supported this research with donations of sit-stand desks.

In part 3 of this series, I will detail how Ergotron’s research delves into sedentary living and its effect on human health and performance.